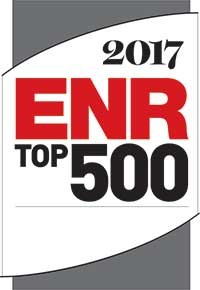 The Engineering News-Record (ENR) is a publication of the McGrawHill Companies and is regarded as a major resource for information about the construction industry. Annually, ENR ranks the Top 500 Design Firms based on worldwide projects. ENR supplies commentary on the current economic environment. As a group, the Top 500 firms had design revenue decrease by 1.1% in the past year. ENR notes that market growth was up on the domestic side, rising 3.8% from last year. However, revenue from projects outside the U.S. fell 7%. D&B, historically, has qualified as a member of the Top 500 Design Firm listing. In 2011, D&B ranked 337; in 2012, D&B ranked 340; in 2013, D&B was in position 298; in 2014, D&B ranked 295; and in 2015, D&B ranked 307. The ENR 2016 Top 500 Design Firms ranked D&B at number 308 and the 2017 ranking jumped D&B 40 positions to 268. D&B’s ENR ranking placement each year represents an outstanding record of achievement and consistent performance.  D&B’s philosophy of designing innovative and cost effective solutions to solve client problems has been a mainstay reason for D&B’s continued success and growth. Building client relationships leads to client loyalty and selection for additional projects. D&B’s sustained  and continued success is an outgrowth of the outstanding commitment and work ethic of all its employees.

Thank you to the D&B Team for your hard work and commitment to excellence you bring to the job every day.