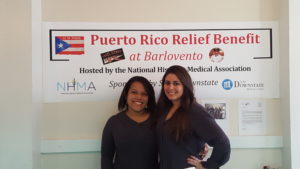 The event aimed to raise donations in support of the ongoing relief efforts in Puerto Rico, which was devastated by Hurricane Maria this past September. Olga Mubarak, along with other members of D&B, attended the event and represented the firm. Among the benefit’s many noteworthy moments, according to Olga, was meeting fellow attendees who recognized D&B’s logo from around New York City—a product of the firm’s increasing presence throughout the five boroughs.

The benefit was organized by Olga’s daughter, Juliana Jaramillo M.D., who expressed gratitude for D&B’s sponsorship and contributions during Puerto Rico’s time of need. Since disaster struck the island, NHMA has been working with Ayuda Mi Isla to coordinate and facilitate the provision of professional medical assistance.

NHMA is a nonprofit association representing 50,000 licensed Hispanic physicians in the U.S. Their mission is to empower Hispanic physicians and other healthcare professionals to improve the health of Hispanic populations with Hispanic medical societies, resident and medical student organizations, and its public and private sector partners.