D&B recently celebrated Steven A. Fangmann, P.E.’s one-year anniversary as the firm’s President. Employees gathered in the main conference room of D&B’s Woodbury, NY headquarters to pay tribute to Mr. Fangmann’s exemplary leadership over the past year. Among those in attendance were Mr. Fangmann’s wife, Lucia, and daughter, Meghan, who joined a majority of the company in surprising Mr. Fangmann with the event.

Mrs. Fangmann opened the festivities by expressing her gratitude to D&B employees for their unwavering loyalty to her husband and to the firm during the transition period in leadership.

Richard Walka, D&B’s Senior Vice President, followed with a toast on behalf of all D&B personnel expressing appreciation and admiration of Mr. Fangmann’s consummate leadership since being named President. Mr. Fangmann thanked those in attendance for their ardent support and commitment to D&B during his first year as President. The occasion concluded with a continental style breakfast, congratulatory cake, and champagne toast. 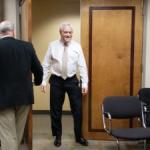 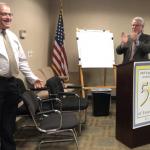 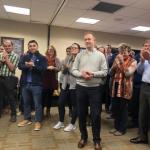 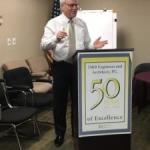 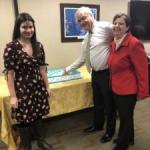 Pictured above: D&B employees gather to congratulate Steven A. Fangmann, P.E., BCEE on his first anniversary as the firm’s president.